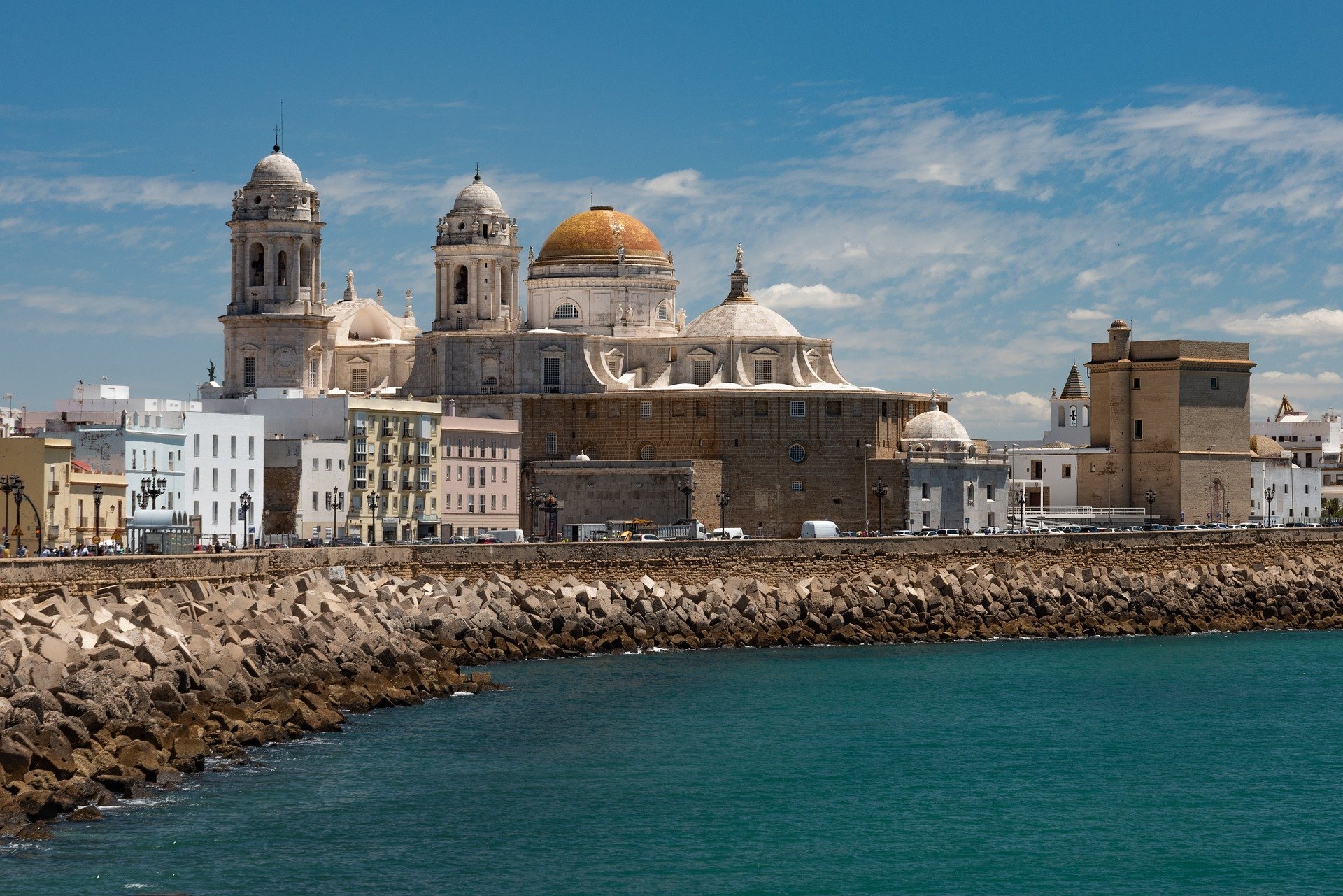 Yes, with the apostrophe in the “a” of Cádiz!. The “little Cuba” in the south of Spain as many songs describe this beautiful city. Cádiz is the most ancient city in Europe, founded by the Phoenicians in 1100 b.c. Due to its geographical situation, Cádiz played an important role in facilitating trade between the Mediterranean and the Atlantic. The different civilizations that entered in Spain (Greeks, Romans, Muslims…) impacted in Cádiz as well but after Cristopher Columbus discovering America, things changed. Cádiz would benefit from the trade with the Indies and would obtain the monopoly with America living its best ecomic and cultural period of its history.

Most recently, Cádiz became the Capital of Spain after being the only city in the country resisting the troops of Napoleon in the 19th century. As a result of this, the first Constitution in Spain was written in 1812 in Cádiz, with a liberal slant. Nowadays, the main source of economic income in Cadiz is tourism. And it is not surprising that they know how to do it well because the “gaditano” knows perfectly how to take good care of the people who come to visit their wonderful city.

In this post, we are going to share why our students love this city so much. And if you decide to visit the city, we will focus on 3 neighborhoods of the old town, to help you with a good walk.

Dated in 13th Century, it is the eldest neighborhood of Cádiz. It is at the entry of the old quarter, close to both the City Hall and the Cathedral. The golden dome of the cathedral of Cadiz is one of the most characteristic postcards of the city. Its good location, at the foot of the sea, makes it visible from any point of the city. The view of the promenade and the cathedral is very evocative of the colonial cities of America. Another interesting and surprising visit is the Roman Theatre. It is one of the largest Roman theaters known, which demonstrates the greatness of the city of Cádiz.

The plaza El Mentidero gives name to the whole area and it means “place to lie”. It is an area to walk peacefully like in the Parque Genovés. This botanic garden with plants of all over the world, is one of the most beautiful city parks of Spain. Along the entire avenue that runs through this park, on the opposite side, is the Rectorate of the University of Cadiz together with other buildings and faculties of the university. We have to emphasize the specialization of the university in the disciplines of Marine Sciences, Nautical Sciences and Naval Engineering.

At the end of the avenue, you can walk through the Alameda Apodaca to witness the fishermen at the balustrade, who patiently try to catch some fish. Another worth visit is the Great Theatre Falla. This is the theatre where it takes place the famous Carnival contest. Near by, you can visit one of the main plazas of Cádiz: Plaza de San Antonio. Here, the Constitution of Cadiz was proclaimed in 1812 and today it is a place for meetings, cultural events, celebrations.

This is a traditionally fishermen’s neighborhood. Cádiz celebrates its carnival vibrantly in its streets and plazas such as the Tio de la Tiza. Walking on this area, we can see the castle of San Sebastian, Castle of Santa Catalina, (today it is an interesting cultural and leisure space for exhibitions, concerts and other spectacles). And the old spa of Nuestra Señora de la Palma y del Real among other monuments. After the visit, you can take a bath at the famous beach of La Caleta and go to its popular taberns and tapas bars.

It is impossible to define all you can see in Cádiz in just one post. Being a city to walk and get lost, you can enjoy many little corners and more plazas and monuments than the ones mentioned here. As an example of this, we can´t forget to mention the Plaza de España, Plaza de la Mina, Torre Tavira, Castillo de Santa Catalina, Plaza de las Flores, etc.

Today, simply mentioning Cádiz puts a smile on your face. Its charming streets of the old quarter make you feel home. People are very easy going and with joyful character. In Cádiz, you just go with the flow with whatever it happens. Surrounded by the sea, it is one of the most beautiful cities in Spain.