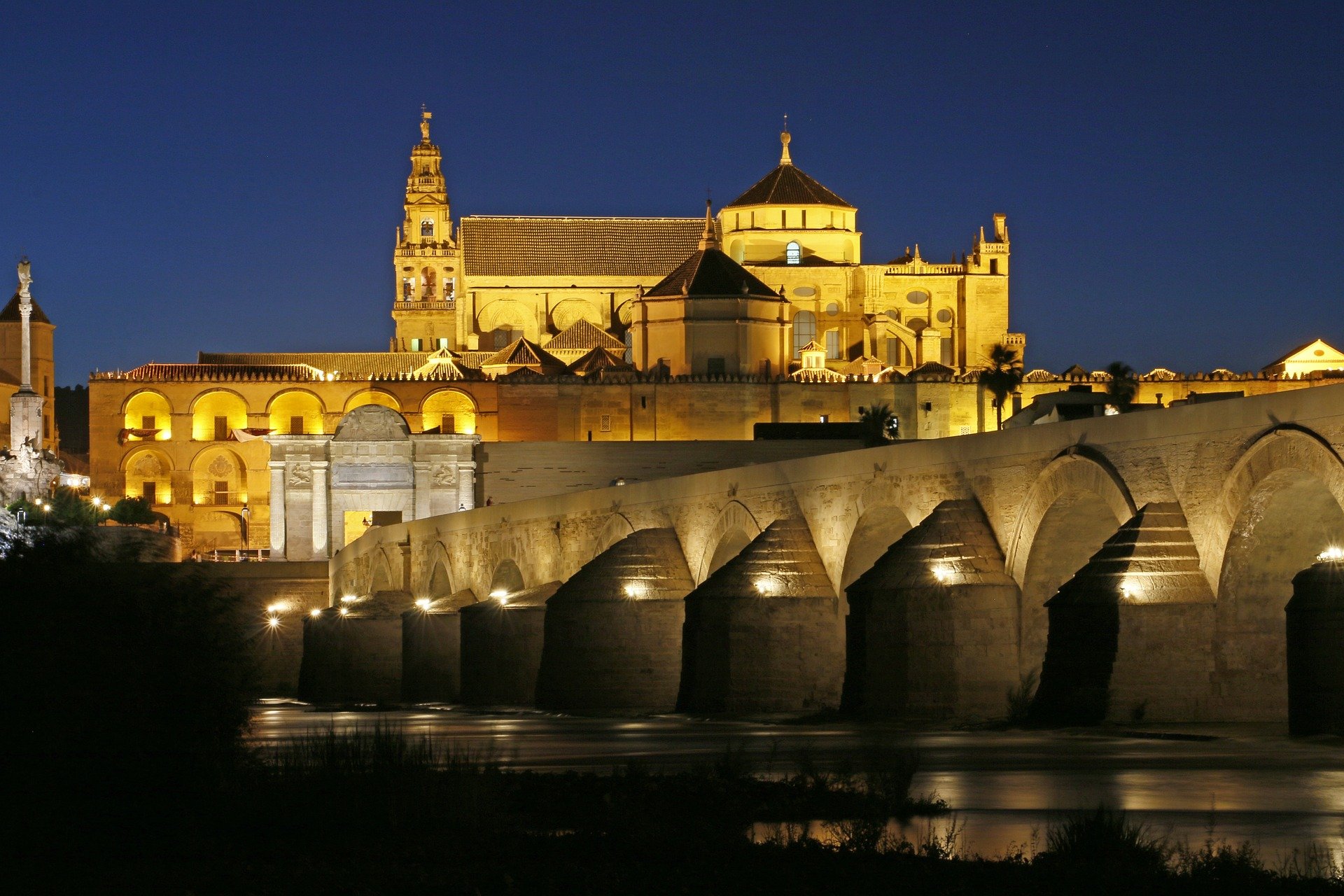 Córdoba, with Roman origins from the 2nd century, lived its maximum splendor under Muslim rule in the 8th century. Due to its vast historical importance, it has become the first city with four World Heritage declarations.

There is no better way to share this beautiful city than by going for a walk by all of them. The Historic Center, the Mosque-Cathedral, the festival of the Patios of Córdoba and the Caliphate City of Madinat Al-Zahra.

The Mosque-Cathedral of Córdoba

The first monument of the entire Western Islamic world is The Mosque-Cathedral of Córdoba. However, the present building is the product of an initial mosque erected in 780 over a Christian basilica. Due to the lack of resources forced to reuse elements of previous buildings, mainly bases, capitals and shafts of Roman and Visigothic constructions. But the Mosque had two more extensions being the first one the most outstanding for its luxury and richness. For instance, this is where the macsura, a space for the Koran, stands out. Having said this, this construction consolidates the mosque as the crowning work of all Islamic architecture.

But what makes this monument exceptional and unique in the world, is the coexistence of a Mosque and a Cathedral. Because basically, the Mosque would not exist today without the construction of the Cathedral.

The historic center of Cordoba is one of the largest old quarters in Europe.
It has a great monumental richness preserving great vestiges of Roman, Arab and Christian times. But this preservation is largely due to the ancient Roman walls and the Muslim restoration and expansion that protects it.
The historic center of Cordoba has two distinct parts: the old Muslim Medina and the Axerquia.

Within the Muslim Medina, there are the remains of the Roman city, the Andalusian Medina and the Jewish quarter. Luckily, this is where we find the most emblematic monuments of Cordoba. We are talking about the Great Mosque-Cathedral, the ancient Jewish Synagogue and Souk, and the Alcazar of the Christian Kings.
The Axerquia is the area that has undergone major changes over the centuries. We can observe it with the creation of plazas, promenades and avenues giving it a more modern and commercial atmosphere.

The Festival of the Patios of Córdoba

Due to the dry and hot climate of many cities in southern Spain such as Sevilla and Córdoba, the typology of the houses had some common characteristics. Thus, first the Romans and later the Muslims, centered the house around a courtyard, with a fountain in the center and in many cases a well that collected rainwater. Even they dressed the entrance to the houses with plants and flowers to give a fresher sensation.

It is fair to say that these popular patios usually belong to private homes of neighbors who take care of them throughout the year. And especially in May they show their greatest splendor to celebrate the Contest of Patios.
Walking through these courtyards of geraniums and carnations, among the scent of jasmine and orange blossoms, is quite an experience. And you will not find two courtyards alike.

The Caliphate City of Madinat Al-Zahra

The Caliphate City of Madinat Al-Zahra is the fourth Unesco Heritage monument declaration of Córdoba from 2018. It deserved this award for providing a unique testimony about a vanished civilization and for being an eminently representative example of an architectural ensemble.

Madinat Al-Zahra was erected in the mid-10th century as the seat of the Caliphate of Córdoba by the western Umayyad dynasty. However, only the first caliph of al-Andalus Abd al-Rahman III and later his son al-Hakam lived there for a total of 40 years. After that brief period of time, it was destroyed and hidden for almost a millennium until its recovery at the beginning of the 20th century. And the outstanding thing is that it preserves all the infrastructure, decoration, buildings and obejects in its moment of maximum splendor.

Córdoba is a city that unexpectedly grabs you. Not only because of its four Unesco declarations, which is already a lot to say. But also for the number of plazas, streets, corners that when you turn around open up another beauty such as a bougainvillea or a historical relic.
Perhaps it is not the best known Spanish city abroad, however it has nothing to envy to any of the others.
Great artists, musicians, painters and even beloved and missed politicians are from Córdoba. And all of them, with their honesty, are the reflection that Cordoba will not leave you indifferent.