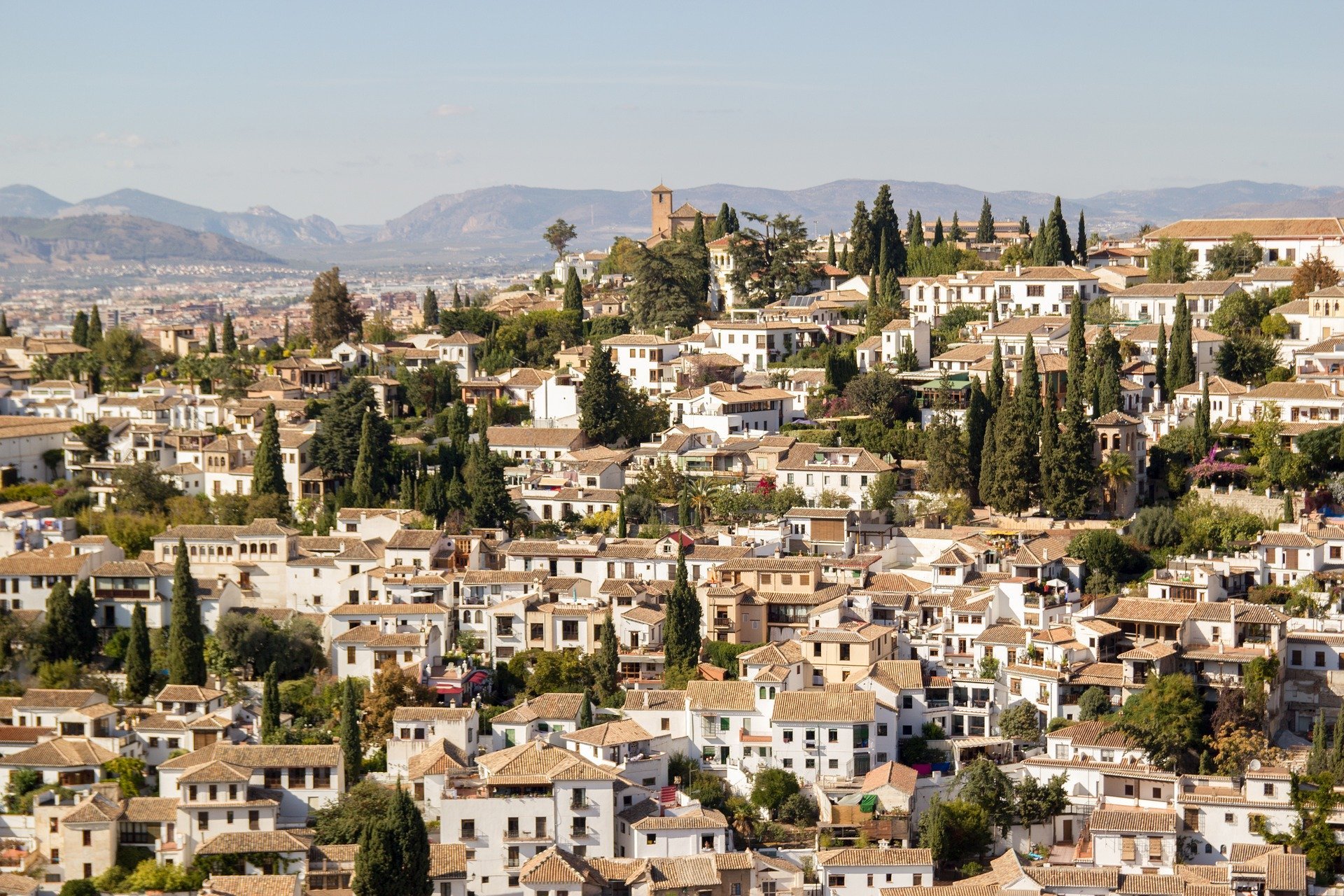 As we said when we started talking about Granada, it is difficult to do it in one single post. In this one we are going to talk about the old Muslim quarter or Albaicin.

The Albaicin quarter, a UNESCO World Heritage Site, is one of the most picturesque and attractive areas of the city. Almost like a city in itself, from several places, you have indescribable views of the Alhambra. In particular, the one you have from the Mirador de San Nicolas. A meeting place for visitors to admire it in all its breadth.

The Albaicin was separated from the old city of Granada by the river Darro. In order to access it, it was necessary to use one of its 11 bridges that crossed the city.

We return from the Plaza de Isabel la Católica with comfortable shoes to kick one of the areas with the best views of the city. We crossthe Plaza Nueva, the oldest square in the city. This plaza was also the most important in which formerly, were held tournaments of gentlemen and bullfights. At the end of the square, we find the church of San Gil and Santa Ana.

Here at this point we turn a little to the right to continue along the street of Santa Ana. We found the Arab Baths Hammam Al Andalus open to the public that offers some baths and very relaxing massages. We follow the path and cross one of the 14 old bridges that connected the Alhambra with the Albaicin. This is the Espinosa bridge from the 17th century.

We arrived at the sidewalk of the Darro next to the same river and we found that there are old stately homes and buildings of the XVI and XVII and various monuments. We highlight El Bañuelo (Hammam very well preserved s.XI), the convent of Santa Catalina de Zafra s.XVI within the heritage complex of the House of Zafra), the parish of San Pedro and San Pablo s.XVI also. Each of them is worth visiting for its architecture and history. At the end of the sidewalk of the Darro we arrive at the Paseo de los Tristes.

Paseo de los Tristes, because that is where the funerals took place on the way to the cemetery. To enter the Paseo de los Tristes, today Padre Mangón, is to encounter the first great image of the Alhambra of Granada. It is worth sitting by the river to observe such a marvel. So we stop for a refreshment in one of the bars overlooking the Alhambra. In the past, they organized bullfights and knights’ tournaments on this promenade of Padre Manjón. That’s why the house on the corner is called Casa de Las Chrimias. The name of the long trumpets used in the knights’ tournaments.

From this point, there are several routes to climb up to the Mirador de San Nicolas. It is a wonder to wander around its streets to discover your favorite corners. In addition, to be able to see the Carmens, typical Muslim houses of great walls and small windows own of their culture, to safeguard the privacy of the home. The insides of these caves have the most beautiful gardens with fruit trees and a fragrance that invites you to cool down with family and friends on summer nights.

El Mirador de San Nicolas was an area of Arabian cemeteries and palaces next to the old mosque. In one of its houses, very important conversations were held that ended with the surrender of Granada to the Catholic Monarchs in 1492. Nowadays it is a square always full of people who come to enjoy the views of the Alhambra and Sierra Nevada. You can also hear some flamenco singing for a dancer to the sound of a guitar. A visit to the Mirador de San Nicolas is one of the sensory pleasures you cannot miss in Granada.

A visit to the Mirador de San Nicolás is one of the sensory pleasures you cannot miss in Granada.
Click to Tweet

We leave the viewpoint and after passing the largest drinking water tank in Granada, we will briefly visit Plaza Larga. It is an elongated square, the social and commercial centre of the Albaycin. We get there through the old Puerta de las Pesas from the 12th century. In the past, this door had a defensive function due to the nook and cranny it makes when entering the old alcazaba. Later, in the 16th century, they whighed products in this door for sale and they hung the defective ones in its arch. While we are here, let’s have a coffee with one of the sweets from Casa Pasteles. Emblematic caffee place of the Albaicin.

We leave this road and head for the Dar Al-Horra Palace. A jewel in the center of the Albaycin, very little visited but a delight for those who do. This palace was built by Boabdil, the last king of Granada, for his mother Aixa in the 15th century. Today it is a building recognized as a Property of Cultural Interest.

Already going down towards Granada after this palace, we will stop at a viewpoint little visited, by the way. It is called the Mirador de la Lona. From there you can see impressive views of the whole city of Granada. This mirador de la Lona is so called because in one of the houses that is still standing, the sails of Columbus’ caravels were woven with the canvas as a fabric.

We continue to move forward to return to the point of origin, we go down the street of the tea shops in Granada or Caldereria Vieja. Our students have an obligatory visit there with their language exchanges. With them, they enjoy a tea with typical Arab sweets in a cosy atmosphere with the aroma of incense and Arab decoration.It is a bustling street with shops, teashops, neighbourhood businesses. Definitely, it is charming. As well as the Caldereria Nueva street that it crosses.

Both streets end in the famous Elvira Street, named after the Elvira Gate, the largest in the original city and which is at the other end of where we are. Elvira Street was one of the oldest streets in the Muslim era and also one of the most important ones. As it was the main road for the transit of people and goods, many shops were created along it and many monuments were built that can still be seen these days. Today, it is the most varied street in the whole of Granada, where the most alternative atmosphere meets. At the end of the street, close by, we find the Plaza de Isabel La Católica which is our arrival point.

Now it is time to rest with one of those relaxing baths in the Hammam Al-Andalus and be ready for tomorrow’s visit to the El Realejo neighborhood.