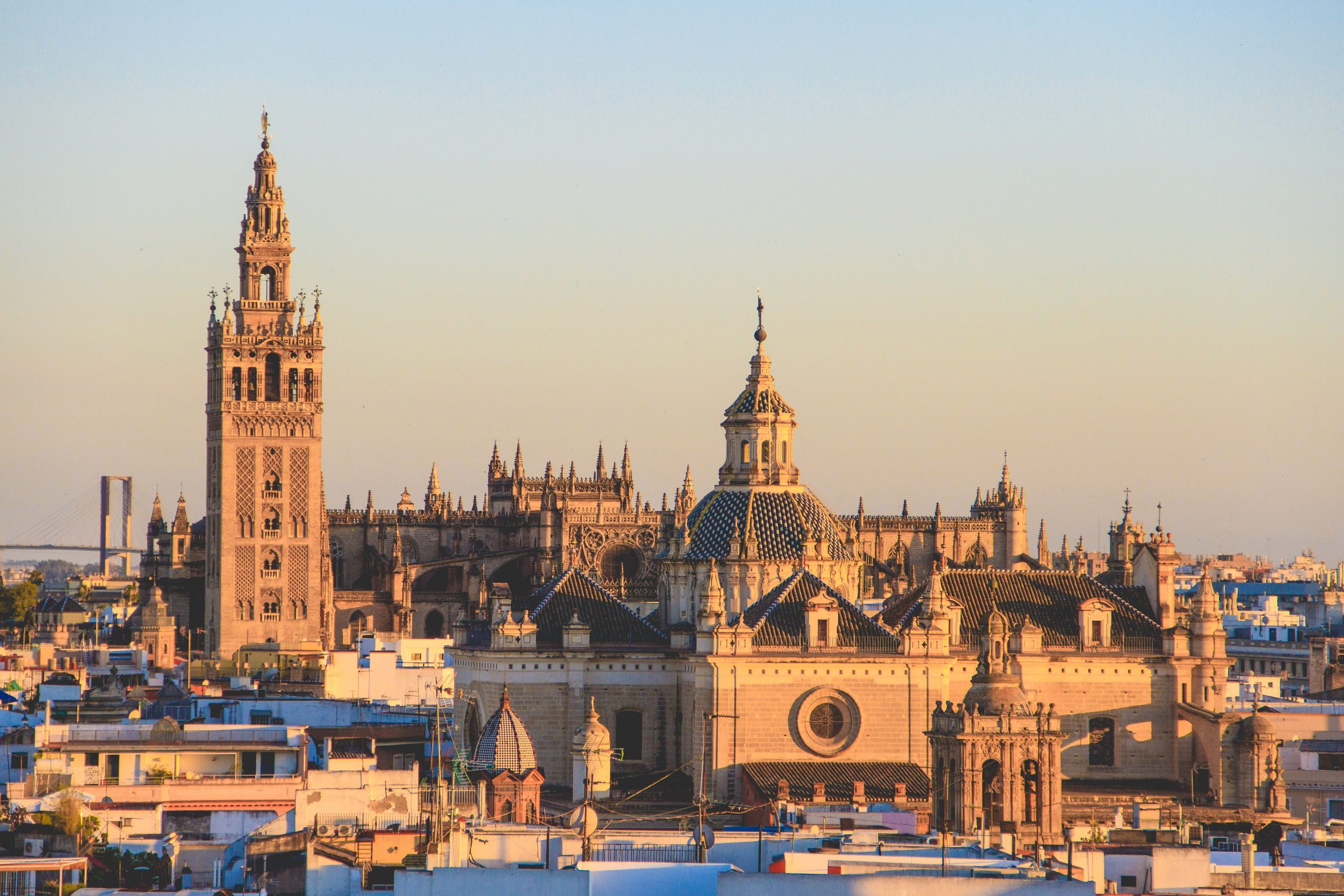 Sevilla, the capital of Andalucía, is a beautiful and ancient city crossed by the Guadalquivir River. Along with Cordoba and Granada, it is one of the three most famous cities of Andalusia.

Only in the historic center of Seville, the largest in Spain and one of the largest in the world, we will discover a rich architectural and cultural legacy. No wonder, Sevilla served as the setting for the operas Don Giovanni and Carmen, and most recently, for the movies Start Wars and Game of Thrones.

In our “must see” tour of Sevilla for our students we distinguish between walks and monuments.

They can start with Plaza Nueva, which is the city center with the monumental City Hall. As they walk south, they cross the Cathedral of Sevilla and they find the Murillo Gardens, attached to the Real Alcazar. These gardens are in the Barrio de Santa Cruz, originally the old Jewish quarter of the city. As a continuation of the walk, near Plaza de España, we can see the Maria Luisa park, a perfect gateway from the hustle and bustle of the city center.

Leaving the park behind, we suggest our students to go for a nice walk along the rive side to see the Torre del Oro. Later on, for the afternoon or evening, we would suggest them to visit the Alameda de Hercules. At the northern part of the city center the students can sit at this plaza in one of the bars and dive in with the locals.

As it was mentioned in the Sevilla walks, students pass through many different monuments. Certainly, a must visit is the Cathedral of Sevilla – La Giralda, which is the largest Gothic Cathedral of the world. Right opposite the main entrance of the cathedral, it is the Real Alcázar. A moorish fort that evolved in a Royal Palace and that it is still in use by our current kings of Spain for special occasions.

If we continue with our walk as described, we get to Plaza de España (see image). Above all, it is a monument itself that was built for the world exhibition of 1929. It is famous tiles of this fabulous pavillion well deserver our student photos. Our next stop is the Torre del Oro near one of the most popular bullfighting rings of Spain, La Maestranza. The Torre del Oro is not a very high monument but its location makes it look outstanding. And to finish with the tour, we always encourage our students to have a soda in one of the bars of the Plaza Salvador with views to La Iglesia del Salvador, the most important church after the Cathedral.

In Sevilla, duality plays an important role. Firstly, the River Guadalquivir separates the city in two sides. Secondly, it has two world-renowned celebrations that are the Holly Week and the Feria de Abril. In addition, there are those who pray to the Virgin of Triana or the Virgin of the Macarena. Lastly, they are followers of two soccer Clubs: Real Betis Balompié and Sevilla Futbol Club. In conclusion, be that as it may, the passion of the Sevillano is everywhere in Seville.

Sevilla is a destination that anyone visiting Spain should go to. Not only for its falvours, colors and its people who welcome anyone from anywhere with open arms. It is its music, its culture, the way you feel walking through its cobblestone streets.
Sevilla is beautiful, it is comfortable to walk around, it is a city of cinema, flamenco and art in general.